White Kali Kratom shines in obscurity. It is a shame that such an exquisite example of kratom is not as well-known as other kratom varieties. This article will attempt to shed some light on the origins of the White Kali kratom and its benefits and uses.

Like all kratom, Kali kratom is endemic to Southeast Asia. In this tropical Asian region, evergreen trees like Mitragyna speciosa (the scientific name for kratom) thrive. It grows in countries like Indonesia, Malaysia, Thailand, and Vietnam, to name a few.

People in Kalimantan have been growing and using kratom for an extended part of their history. This strain carries a long tradition with it, which is perhaps why it is so exceptional. It seems more and more vendors have it in stock lately, and kratom enthusiasts hope to see this trend continue.

White Kali brings many benefits, but mainly is its efficient use of nutrients from the soil to grow and produce a high number of alkaloids. In kratom, mitragynine and 7-hydroxymitragynine are the primary alkaloids believed to be responsible for the plant’s wondrous abilities.

Alkaloids are chemicals that contain nitrogen and are found throughout the plant world. They exert effects on humans. The most famous alkaloid is caffeine, which, like kratom, is named for the plant it belongs to (coffee). On a side note, coffee and kratom happen to belong to the same plant family, Rubiaceae

In the White Kali kratom, mitragynine comprises the majority of its elevated levels of alkaloids. The reason for this is that white leaf kratom comes from the least mature leaves of the plant. As kratom’s leaves mature, more mitragynine is converted into 7-hydroxymitragynine through oxidation.

White Kali grows well and produces a high yield of leaves. For this reason, it seems like a matter of time before all your favorite kratom vendors start stocking this exceptional kratom variety.

White Kali is primarily thought of as an energizing plant. However, all kratom has 7-hydroxymitragynine in some quantities, and the White Kali kratom is no exception. That means it has the potential to be a relaxing strain. The resultant outcome of using the same kind of kratom can vary from person to person. 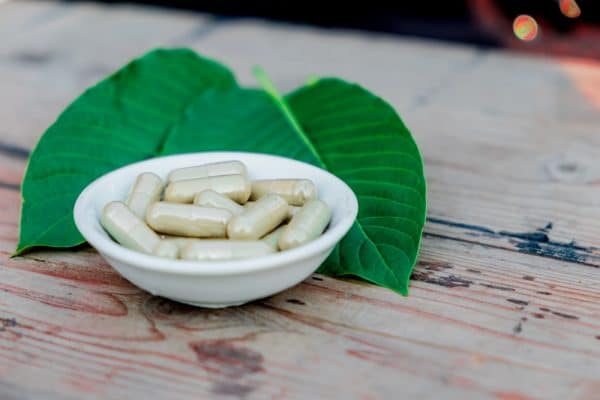 The following effects are those that are most frequently associated with the White Kali kratom:

Of course, the above effects should be thought of as a starting point to understanding the White Kali kratom. You really cannot discover its effects fully without trying some.

Since your experience will be unique to you, that is the only way to realize the full scope of this kratom strain. Hopefully, as more vendors start to stock this rare strain, you will have the opportunity to try it yourself.

The amount of White Kali kratom powder you should take is also specific to you. The same principles that apply to how we respond to varying kinds of kratom apply to dosage. There is no one-size-fits-all White Kali dose.

For starters, your body and mind are unique. Then you have to consider that you might want a different effect from someone else. People’s varying responses to kratom also depend on how much experience they have using the plant.

To anyone who is just starting with kratom or with the White Kali kratom, begin with a small amount. You can use a sample to determine whether you like the White Kali kratom and assess how you respond to it. Once you know this about yourself, you can start to adjust the amount you take from there.

Many people also mask the bitter flavor of the White Kali kratom. You can take it plain or mixed with something without having any effect on the results. Many people also like making tea with kratom powder, which is an easy thing to add sugar or milk to mask the harshness.

White Kali has a lot in common with many varieties of kratom. That is because most kratom varieties originate in the land of Borneo. White Borneo, White Horn, and White Sumatra share many traits with the White Kalimantan kratom. People who prefer white vein kratom consider these some of the best, and they tend to rotate between a few types.

If you want something as potent as but more sedating than the White Kali kratom, you should try to source some Green Kali or Red Kali. Red Kali will be the most relaxing of the three, with the Green Kali kratom falling somewhere in the middle.

The people who grow the White Kali kratom know a thing or two about relaxing and a lot about kratom. You should not pass up the opportunity to try this excellent kind of kratom if you have it.

The 10 Best Kratom Shops to Buy From in Yonkers, NY

The 8 Best Kratom Shops to Buy From in Wilmington, NC

1. Kratom NC     Kratom NC is a place where you can get excellent